You might think that you’ve got all bases covered when it comes to being prepared for the first day of your construction apprenticeship – your route to work, any supplies you’ll need, what questions you’re going to ask – but there’s one thing you may not have thought about. We’re talking about the typical pranks that almost all apprentices have to suffer at some point. They’re pretty much a rite of passage. But, with the help of Hitchcock & King, you’ll be forewarned about these tricks of the trade so you can avoid looking like a tool! 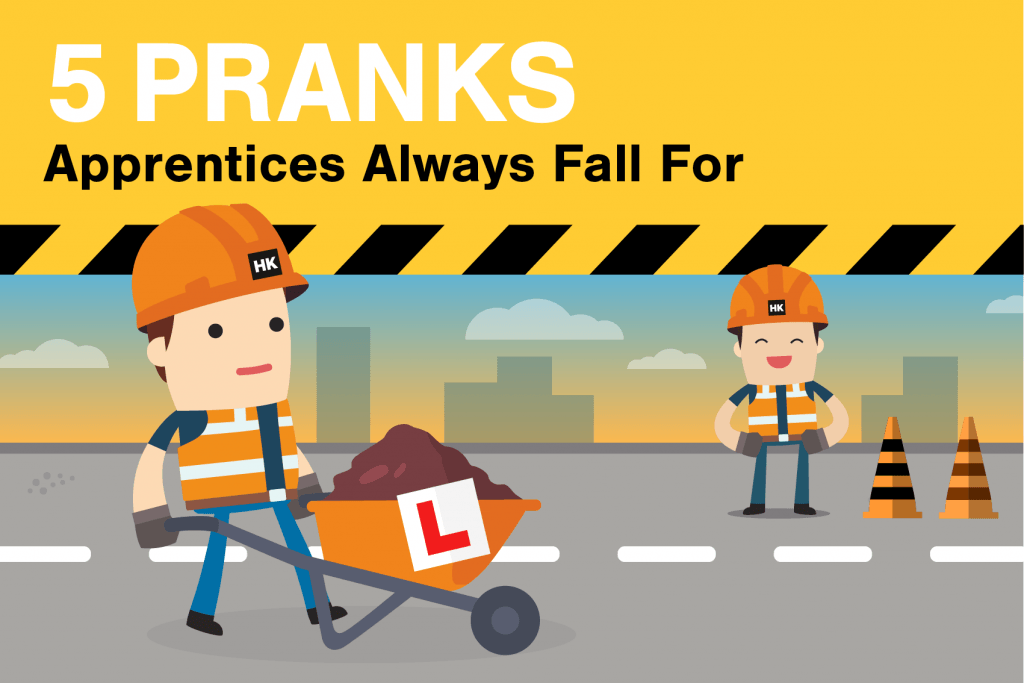 This is a classic that never gets old. New apprentices are often sent off on errands by their colleagues, whether it’s fetching today’s lunch or picking up some supplies. If you’re not on your guard, you might fall victim to being given a fake shopping list. You’re guaranteed to be left a little red-faced when you ask the shop assistant for a long weight only to receive a long wait.

Remember to stay on the lookout for these fictitious supplies:

There are plenty of power tool pranks out there, but this is one of the most popular. Tricksters will tell gullible apprentices that the only way to start a disc cutter is by bump starting it, running with it trailing on the ground in order for it to work. This, of course, results in an apprentice looking rather silly as they run around like a headless chicken only to find that the disc cutter won’t actually start.

This is probably the most savage on the list, so make sure you don’t fall for it! You’ve probably seen this one floating around on social media – the strength test involves apprentices being asked to hold a bag of cement or plaster over their head to prove their lifting capabilities.

Once they’ve lifted it over their head, someone standing behind them reaches up and cuts the bag open, leaving the unsuspecting victim covered in powder. Cruel, but classic.

Bossing the boss around

Often, apprentices will be told that there’s a new person coming in to help for the day, and to give them odd jobs to do. Little do they know that this ‘new person’ is in fact the boss, who won’t be happy when the young apprentice starts trying to tell them what to do!

Saving the best ‘til last… This prank is almost believable if you haven’t been warned in advance. The video below shows an apprentice who has been told that HSE requires him to do a ‘Wheelbarrow Proficiency Test’ – complete with three-point turns and reversing around the corner.

Obviously health and safety is extremely important on-site, but make sure you’re not fooled into taking part in any bogus tests like this poor guy… to be fair though, he did wheelie well!

Hitchcock & King is a leading builders’ merchant, supplying top-quality building and timber supplies across several branches in London. Give our friendly team a call or pop in to browse our huge range of products.